Are you readying your manuscript to query agents? Are you preparing for this year’s RevPit event? What better way to know if your query and first 5 pages have what it takes to stand out in the slush pile than to get an editor’s eye on it? As editors, we offer a professional perspective with insight into ways to improve your work.

In preparation for the #revpit annual contest in April, we are hosting a bonus #10Queries event, February 8th - February 15th, 2019.

In this event, writers will enter their names in a random drawing via Rafflecopter. If they are selected, their query and first five pages will be randomly assigned to an editor who will then tweet about the submission using #10Queries. Winners will not know which editor received their submissions until after the #10Queries tweets have been posted.

Tweets will consist of brief feedback based on the editors' first impressions of the winners' queries and first five pages. Not familiar with #10Queries? Learn more here: How an Editor Sees It (#10queries)

Writers must have a complete query letter and first 5 pages of manuscript in order to enter but will not submit these materials unless their name is drawn.

Writers may enter the drawing Friday, February 8th until 11:59 PM. They may enter their names multiple times via Rafflecopter, but their name can only be drawn once.

This event is separate from the main #RevPit contest in April. For this #10queries event, winners will not receive a full edit.

Participation from all contestants is encouraged. Even if your name isn’t drawn in the raffle, you can learn so much from the #10queries tweets.

All times are listed in Eastern Time on Friday, February 15th 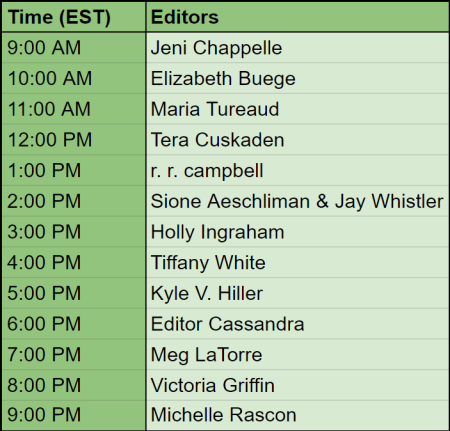 Note: Now that Twitter no longer limits tweets to 140 characters we may even have longer #10Queries tweets.

Editors participating in this event:

Sione Aeschliman: An editor with a Master’s degree in English and over sixteen years of editing experience, Sione Aeschliman (pronounced see-OWN ASH-lemon) gets massive amounts of satisfaction from helping writers achieve their goals. She is one of the co-founding RevPit Editors and lives in Portland, Oregon with her adorkable dog, Milton.

Elizabeth Buege: Elizabeth Buege is a freelance book editor from Minnesota. She’s a founding editor for Revise and Resub (#RevPit) and provides manuscript critiques and editing services for both querying and indie authors. When she’s not working, you’ll find her learning languages, gaming with friends, drinking tea, and cooking up tasty messes.

r. r. campbell: r. r. campbell is an author, editor, and the founder of the Writescast Network, a podcast collective for writers, by writers. His novels Accounting for It All and Imminent Dawn were published with NineStar Press in November 2018 and January 2019, respectively.

Editor Cassandra: The complete Ravenclaw package, Editor Cassandra earned her BA in English from Rochester College where she now teaches, and her MA in Creative Writing on the Novel track from Newcastle University. She can be found taking MMA classes, and playing with her dogs Mollie and Delacour in Capac, MI, online at editorcassandra.com, and on twitter @OnlyCassandra.

Jeni Chappelle: Jeni Chappelle is a freelance editor, cofounder of Revise & Resub (#RevPit), and member of Editorial Freelancers Association and SCBWI. She considers herself a hobbit (minus the big, hairy feet) and lives in a tiny town in NC with her family and too many pets. You can find her at www.jenichappelleeditorial.com.

Tera Cuskaden: Tera Cuskaden, freelance editor, started working in publishing in 2004. After spending nine years with Samhain Publishing as a Senior Editor, she moved to Entangled Publishing as an Editorial Director for two years. Tera holds a bachelor’s degree in English from Indiana University.

Victoria Griffin: Victoria is an East Tennessee author and editor. Her favorite genres include literary and speculative fiction, and she has a soft spot for genre-blending books and anything set in Appalachia. Find her at VictoriaGriffin.net and on Twitter @victoria_grif7.

Kyle V. Hiller: Kyle V. Hiller is the author of THE RECITAL and co-founder of Angelella Editorial. As an editor, he favors contemporary, science fiction, and magical realism YA fiction, specializing in authenticity reading, line editing, and more. He's been freelancing as an editor since 2017.

Holly Ingraham: An editor with over a decade's worth of industry experience on both the agency and publishing house sides, Holly Ingraham believes publishing is all about collaboration and communication, and loves helping an author put the pieces together to help create their best book possible. She lives just outside of NYC with her husband, twin daughters, and two furbabies.

Maria Tureaud: Maria Tureaud—immigrant, warrior, an all-around cat lady—is both a freelance editor and writer. One half Tolkien, one half Kirk, she is co-founder of CraftQuest, a freelance editing service that puts writers first. Find her creeping on Twitter @Maria_Tureaud and her website www.craftquest.org

Jay Whistler: Jay Whistler holds an MFA in creative writing from VCFA, and an MA in technical writing. She is an editor for literary journals, has written for PUBLISHERS WEEKLY, and is an acquisitions reader for a literary agency in New York.

Tiffany White: Tiffany White is the professional editor behind Writers Untapped. A lifelong word nerd, an avid reader, and a certified editor, Tiffany uses her experience to guide her clients, whether they’re pursuing traditional or self-publishing.

We hope to see you participate! And remember that every writer can benefit from following the #10Queries thread on February 15th.